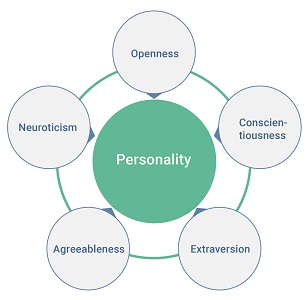 If you are seeking a free alternative to the Big Five Personality Test or if you are looking for a free personality test, you’ve found it with HIGH5! HIGH5 is a free strengths test that helps people discover their traits to find out what they are naturally good at.

It is one of the most utilized personality models in academic psychology and is deemed the most scientific way of understanding the theory of personality and personality differences.

It is supported by extensive statistical and research data, and it offers a proven method to measure people’s personality differences.

The test is called the Big Five, as it proposes five independent factors or dimensions (traits) that measure human personality.

The combination of these traits gives the popular OCEAN or CANOE acronyms under which the Big Five goes. So, let’s take a look at what these traits are and what they measure.

Each of these five broad personality dimensions contains many other sub traits or facets that deliver a more accurate personality description.

The score generally remains stable throughout a person’s lifetime, and they hardly ever change.

Each of the traits represents a continuum that ranges from 0 to 100%, and depending on someone’s personality trait, he/she can fall within the range.

Openness – When we talk about Openness in the Big Five context, we refer to the dimension that involves openness to new experiences, open-minded points of view, accepting new ideas, and insightfulness.

Test-takers can score high, average, and low on the scale, and depending on their personal result, and they can see the level of their open-mindedness and authority-challenging attitudes.

It is related to the interconnection of specific brain regions that allow some people to see patterns and connections where others fail to do so.

Conscientiousness – This trait describes the level of discipline and self-control while pursuing one’s goals. This trait is directly connected to the work of the frontal lobe of the brain, i.e., it regulates the instincts and animal drives in humans.

For instance, the level of its expression in people determines whether someone is more prone to doing an entertaining and fun activity without focusing on consequences, or he/she will choose to do less fun but important tasks.

It mostly reveals the level of responsibility and dedication in an educational or work-related environment.

Extraversion –  This trait describes someone’s preference to interact with the outside world, i.e., whether someone gets energized when interacting with other people or by spending time alone.

Taken from a scientific point of view, it is related to dopamine levels in the brain when pursuing a goal or expecting a reward.

The higher the excitement, the higher the dopamine level. Scientific studies have shown that extroverts tend to have an increased dopamine activity compared to introverts.

Agreeableness – It is the trait that involves an innate desire to help others, prioritize others’ needs over oneself, and cooperate rather than compete.

People who have a high agreeableness level show more empathy and tend to be more helpful. This trait is associated with the activity in the superior temporal gyrus, i.e., a brain region that plays a role in recognizing other people’s feelings and language processing.

Neuroticism – It measures how people react to triggers and stressors and how they deal with negative emotions, sadness, guilt, shame, fear, and anxiety. It is often referred to as an alerting trait related to irregularities, dangers, and discrepancies.

Different research associates Neuroticism with specific interconnection among brain regions that process negative emotions or stimuli or altered serotonin activity in the brain.

It also explains why different people react in different ways when faced with danger, fear, or anxiety.

Know Your Best Self

Discover what is unique about you, what motivates & drives you

Leverage your talents to realize your dreams faster

Understand others and enhance your interactions with them

Make better decisions about your career and your future

YOU ARE IN GOOD COMPANY

Over 1 500 000 people from all walks of life have used HIGH5 to find their best possible selves and to live the life they have always wanted.

Disclaimer: HIGH5 does not intend to replicate or to substitute Big Five Personality Test as both tests follow different methodologies, yet bring value in similar ways. Both tests help test takers be more aware of their own personality. HIGH5 does not dispute or diminish the value of the Big Five test and encourages test takers to go through both assessments. If you have any questions, please do not hesitate to reach us at hello(at)high5test.com

All other trademarks not owned by HIGH5 Test that appear on this Web site are the property of their respective owners, who may or may not be affiliated with HIGH5 Test.