If you are seeking an alternative to the free Enneagram test with wings, or if you are looking for a free personality test, you’ve found it with HIGH5! HIGH5 is a free strengths test that helps people find out what they are naturally good at.

Know Your Best Self

Discover what is unique about you, what motivates & drives you

Leverage your talents to realize your dreams faster

Understand others and enhance your interactions with them

Make better decisions about your career and your future

What is the Enneagram Test?

The Enneagram test represents an interactive personality test designed to help individuals reveal how emotions influence their lives and how people interact to achieve personal gain and success.

It is based on the Enneagram model of personality that helps people understand people’s essential drives and fears.

The Enneagram test distinguishes nine personality types and 27 subtypes. Each of them has its unique system of unique strengths, weaknesses, and areas for personal development and growth. The test scores reveal what drives you on a very deep personal level. These personalities are marked as numbers.

However, each of them has a cluster of features that dominate and describe each type. Therefore, they have been nicknamed accordingly to help you better understand their meaning. 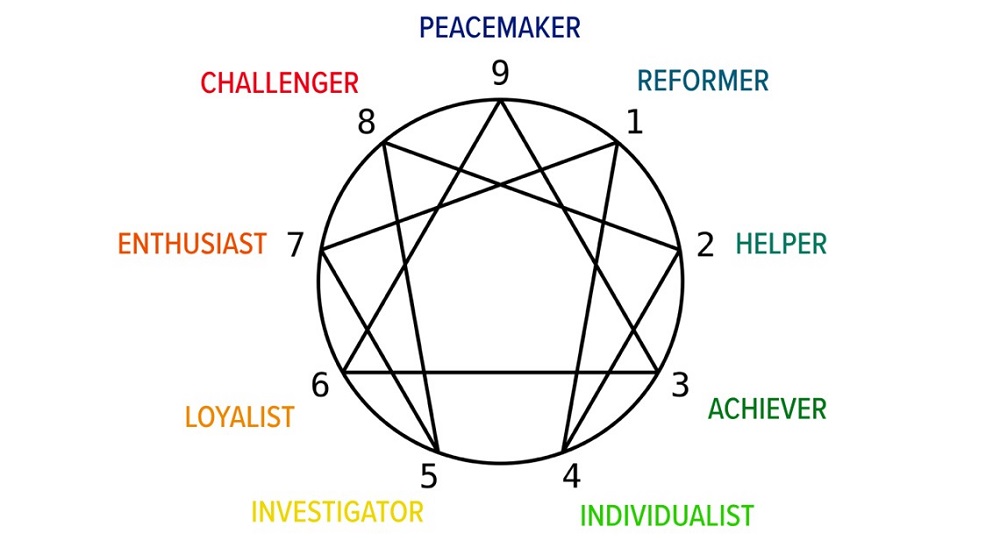 Why Should You Take The Enneagram Test?

There are multiple interactive personality tests online aimed to tackle personality strengths and weaknesses, so it seems legit to ask what makes the Enneagram test stand out?

The peculiarity of the Enneagram test is that it focuses on finding out a person’s deep desires, motivations, and tendencies on a much deeper level.

Once the person becomes familiar with his/her personality type level, he/she gets the secondary types or the so-called ‘wings’ that point to the person’s maturity level, stress level, and anxieties.

Each of the nine types has its inherent strengths and preferences that are natural for the person. Similarly, every individual has his/her weaknesses that might be an obstacle to leading a successful and fulfilling life.

Even though it is a fairly complex system, it is referred to as the ultimate self-discovery journey.

Test-takers need to know that no type is considered superior to another, and each has its own perks and flows.

Sometimes, depending on the culture testers belong to, one type might appear more favorable, but it is due to the socially imposed norms, not because of the personality itself.

How Does The Enneagram Test Work?

The relatively complex Enneagram structure can be best described if you have a visual representation of the types. To better understand it, draw a circle and mark nine equidistant numbers, with the number nine on the top of it.

These numbers represent the personality types.

The theory is that we are born with one predominant personality type, i.e., an inborn orientation that influences the way we develop in our childhood.

It is commonly accepted that a person’s basic personality type doesn’t change, and no type is inherently feminine or masculine.

However, you need to be aware that not all of the basic type features will be a complete match to your personality since people tend to gravitate toward various orientations and habits in their lifetime.

In addition to the specific type with dominant traits, the personalities belong to the so-called Center that integrates three emotional processes: Instincts (body), Thinking (head), and Feeling (heart).

Three of the personalities belong to either of the three centers based on the dominant emotional issues they have.

Not that other personalities don’t feel the rest of their emotions. However, those that belong to the specific Center appear to be the most affected by them.

The Wing complements the dominant personality type in a synchronizing or contradictory manner, delivering broader aspects to the main personality.

If you are type Seven, then your Wing is either Six or Eight, so to better understand yourself, you need to consider your Wing’s features as well.

In some cases, a person can be influenced by the two adjacent Wings, and others exhibit features characteristic to their dominant personality type.

Things To Consider About The Enneagram Test Results

In case your scores are unequally scattered to three to five personality types without concluding information about your dominant type, then chances are you are a Six. When you have a result of close ties, then you could be a Nine, a Six, or a Three.

In case you are a woman and your score indicates that you are a Two, it is advisable to look at the next two high scores because traditionally, women are taught to play the role of a helper.

How Accurate is the Enneagram Test?

The accuracy of the Enneagram quiz depends on how you interpret the results you get. This means that the individual needs to become familiar with the exact interpretation of the words used to describe each personality type.

The reliability of the test also depends on the answers you provide when taking the test. You must be honest and select the option that is the most applicable to you.

Once you get the results, you can get amazed by the accuracy it describes your personality and pinpoints your greatest emotional strengths and weaknesses.

For reference, it has been reported that the Enneagram Institute’s Riso-Hudson Enneagram Type Indicator (RHETI) shows about 72% accuracy, which is a very high score for personality tests of this type

Disclaimer: HIGH5 does not intend to replicate or to substitute the Enneagram test as both tests follow different methodologies, yet bring value in similar ways. Both tests help test takers be more aware of their own personalities. HIGH5 does not dispute or diminish the value of the Enneagram test and encourages test takers to go through both assessments. If you have any questions, please do not hesitate to reach us at hello(at)high5test.com

Enneagram is a registered trademark of The Enneagram Institute®. All other trademarks not owned by HIGH5 Test that appear on this Web site are the property of their respective owners, who may or may not be affiliated with HIGH5 Test.